Sour Sdey! Hello!
There’s magic in traveling Cambodia that casts a spell on many that visit this charming yet confounding kingdom. Ascend to the realm of the gods at the mother of all temples, Angkor Wat, a spectacular fusion of symbolism, symmetry and spirituality. Descend into the hell of Tuol Sleng and come face to face with the Khmer Rouge and its killing machine. Welcome to the conundrum that is Cambodia: a country with a history both inspiring and depressing; an intoxicating place where the future is waiting to be shaped. 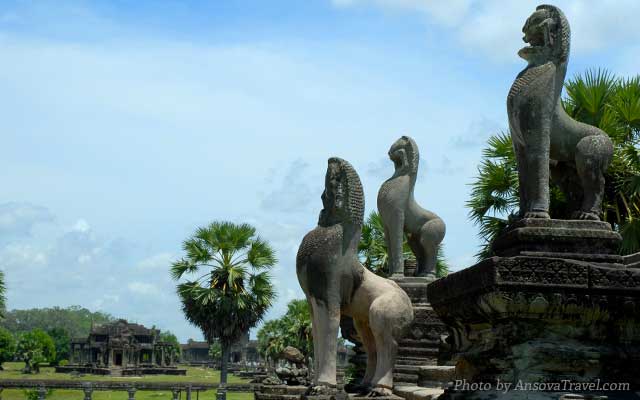 Just as Angkor is more than its wat, Cambodia is also more than its temples. The chaotic yet charismatic capital of Phnom Penh is a hub of political intrigue, economic vitality and intellectual debate. It is often overlooked by hit-and-run tourists ticking off Angkor on a regional tour. The revitalized city of Siem Reap is finally earning praise thanks to a gorgeous riverside location, a cultural renaissance and a dining and drinking scene to rival the best Cambodia travel in the region. Don’t forget the rest of the country; relax in the sleepy seaside town of Kampot, trek the nearby Bokor National Park, gaze out at the Mekong dolphins at Kratie or simply choose a beach near Sihanoukville. 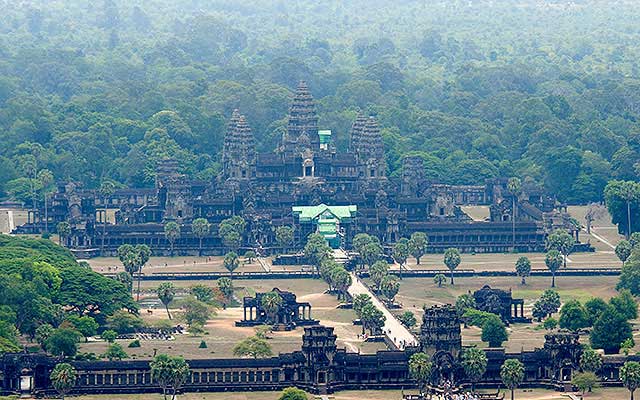 Contemporary Cambodia is the successor state to the mighty Khmer empire, which, during the Angkor period, ruled much of what is now Laos, Thailand and Vietnam. The remains of this empire can be seen at the fabled temples of Angkor, monuments unrivaled in scale and grandeur in Southeast Asia. The Cambodia traveler’s first glimpse of Angkor Wat, the ultimate expression of Khmer genius, is simply staggering and is matched by only a few select spots on earth, such as Machu Picchu or Petra.

Siem Reap and Phnom Penh may be the heavyweights, but to some extent they are a bubble, a world away from the Cambodia of the countryside. This is the place to experience the rhythm of rural life and timeless landscapes of dazzling rice paddies and swaying sugar palms. Spend some time in the srok (provinces), as Cambodians call them, enjoying a dar leng (walkabout) to discover the true flavor of the country.

Tropical islands fringe the south coast, with barely a beach hut in sight. The next Ko Samui or Gili Trawangan awaits discovery and for now, visitors can play Robinson Crusoe. Inland from the coast lie the Cardamom Mountains, part of a vast tropical wilderness that provides a home to elusive wildlife and is the gateway to emerging Cambodia travel ecotourism adventures. The mighty Mekong River cuts through the country and is home to some of the region’s last remaining freshwater dolphins. Cyclists or dirt bikers can follow the river’s length as it meanders through traditional communities. The northeast is a world unto itself; its wild and mountainous landscapes are a home for Cambodia’s ethnic minorities and an abundance of natural attractions, including thundering waterfalls and pristine crater lakes.

Despite this beautiful backdrop, life is no picnic for the average Cambodian. It remains one of the poorest countries in Asia and it’s a tough existence for much of the population, as they battle it out against the whims of nature and sometimes, of their politicians. According to the United Nations Development Programme (UNDP; www.undp.org), Cambodia remains poorer than Mongolia and El Salvador, just scraping in ahead of Mauritania, while Transparency International (www.transparency.org), the anticorruption watchdog, rates the country a lowly 151 out of the 163 countries ranked. Income remains desperately low for many Khmers, with annual salaries in the hundreds of dollars, not thousands. Public servants such as teachers are unable to eke out a living on their meager wages.
The pristine Cambodia travel environment may be a big draw, but much of it is currently under threat. Ancient forests are being razed to make way for plantations, rivers are being sized up for major hydroelectric power plants and the south coast is being explored by leading oil companies. All of this helps add an even stronger economy, which is growing 10 percent a year. However, it’s unlikely to encourage the ecotourism that has just started to develop.
Cambodia travel is like the teen starlet who has just been discovered by an adoring public: everyone wants something from her but not everyone wants what is best for her. The government, long shunned by international big business, is keen to benefit from all these newfound opportunities. Contracts are being signed off like autographs and there are concerns for the long-term interests of the country.

The tourism industry has benefitted Cambodia in many ways. It provides opportunity and employment for a new generation of Khmers while also helping to spark a rebirth in the traditional arts. Tourism has also given the country a renewed sense of pride and optimism as it recovers from its dark decades of war and genocide. However, not all tourism has been good for the country and there is the dark side of sex tourism, human exploitation and a casino culture. Cambodia is in a great position to benefit from the mistakes of other countries in the region and follow a sustainable road to tourism development. However, it may be that the government is more focused on the short-term gain that megabucks investments can provide. Can Cambodia be all things to all visitors? So far, so good, but a new era is about to begin, and the beaches are the next battleground.

Despite having the eighth wonder of the world in its backyard, Cambodia’s greatest treasure is its people. The Khmers have been to hell and back, struggling through years of bloodshed, poverty and political instability. Thanks to an unbreakable spirit and infectious optimism, they have prevailed with their smiles intact. Travelers do not come away from Cambodia without a measure of admiration and affection for the inhabitants of this enigmatic kingdom.

Cambodia has beaches as beautiful as Thailand without the tourist tide, wilderness as remote as Laos but less explored, cuisine as subtle as Vietnam yet to be discovered and temples that leave Burma and Indonesia in the shade. This is the heart of Southeast Asia, with everything the region has to offer packed into one bite-sized country. If you were only planning to spend a week traveling Cambodia, it’s time to think again.

Have you ever been to Cambodia? if Yes – Share your experience with others!