Bas-reliefs, arguably the most famous achievements of Khmer art, adorn many of the temples. Angkor alone boasts over 600m of narrative carved on the exterior walls. The main sources for the relief subject-matter are the legends and mythology found in the Hindu epics, the Mahabharata and Ramayana. Once you’ve gotten over the magnitude of the temple, this is where to spend time appreciating the skill and creativity of the Khmer craftsmen. Gory warring scenes, epic battle victories of Vishnu over the Asura’s and legends of ancient heroes captured in stone.

It’s easy to be overwhelmed by the enormity of the Khmer temples of Angkor. Spread across 400 square kilometers with over 70 temples and monuments, the Angkor Archaeological Park contains the remains of architectural wonders that span from the 9th to 15th centuries. The sheer scale of many temples enabled the Khmer to give unprecedented expression (through architectural design) to religious symbolism. Angkor Wat is the symbolic microcosm of the Hindu universe and was essentially the abode of the gods (atop Mount Meru), a heavenly complex, carved in stone, found on earth. Besides the magnificence of the scale of the ruins themselves, one of the real gems of this world heritage site is the iconography and imagery found on a smaller scale in the bas-reliefs. 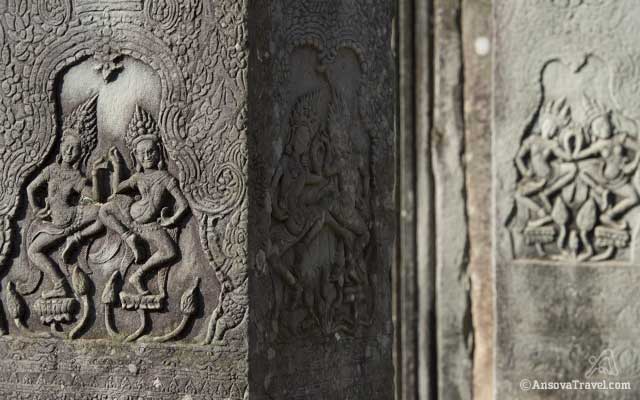 Bas-reliefs, arguably the most famous achievements of Khmer art, adorn many of the temples.

One of the best bas-reliefs is to be found on the wall of the east gallery of Angkor. The myth of creation, displayed as the Churning of the Sea of Milk unfolds across 49m of continuous panel scenes. The Hindu creation myth is a complex, lively narrative with great visual detail. At first glance it looks like a tug of war with a giant serpent serving as the rope; at the gallery’s center you notice the serpent or naga is coiled around a mountain. The gods and demons pull back and forth on the serpent for 1,000 years, churning the cosmic sea to produce the elixir of immortality, amrita. The composition is so skillful that the entire relief appears as a massive chain of movement.

Visiting the galleries of the bas-reliefs can be done at any time of day. As the galleries are sheltered it’s a good place to spend time during the monsoon’s afternoon showers.

Have you ever been to the Angkor Complex?

Please visit our website www.ansovatravel.com to view Ansova’s Cambodia Collection of Journeys. Or contact us via email at contact@ansovatravel.com for more information.