A general understanding of certain terms used in Khmer art can really bring a frieze or panel alive. With just a few words under you belt, you’ll be able to differentiate between apsaras and asuras. 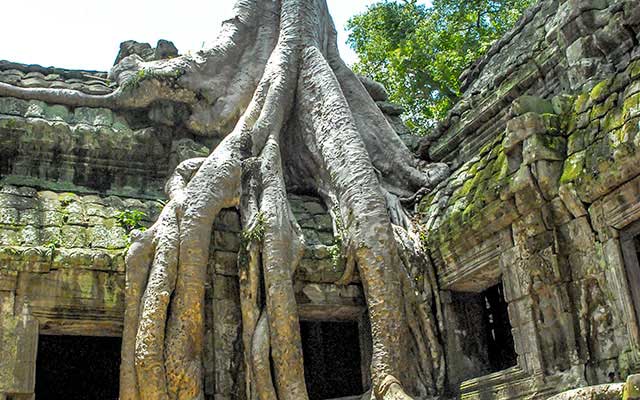 Generally, Hinduism dominated across the Khmer empire until the end of the 12th century. Many of the temples are adorned with figures of gods or myths and stories relating to them.

Mahayana Buddhism arrived in the Khmer empire during the 12th century and replaced Hinduism for about 100 years. Therefore, do not assume that every temple’s iconography is Hindu. Buddha’s and Bodhisattvas can also be found among the dancing apsaras, nagas and gods…

agni – vedic god of fire
angkor – meaning royal city or capital
angkor thom – the great citadel
angkor wat – capital formerly dedicated to Vishnu, later a Buddhist sanctuary
amrita – elixir of immortality
apsaras – celestial maidens or female deities, usually depicted as dancing
asura – demon and enemy of the gods locked in perpetual conflict
avatar – manifestation or physical image of a Hindu god, can be human or animal form
baray – artificial lake for water catchment, part of temple complex
bodhisattva – in Mahayana Buddhism, a being who stops short of enlightenment in order to return again and again to the world, to relieve suffering and help all sentient beings
brahma – the Hindu creator of all things
brahmin – a Hindu priest
buddha – name of the historical figure, Gautama Buddha who lived 5th century b.c
garuda – mythical bird and vehicle of Vishnu, enemy to the nagas
lingam or linga – phallic symbol of the Hindu god Shiva, symbolises fertility
meru – sacred mountain, the abode of the Hindu god Shiva
naga – mythical multi-headed serpent, guardian of the waters, enemy to garudas
nirvana – Buddhist concept of freedom from suffering and the escape from rebirth
phnom – mountain or hill
samsara – the nature of existence, a continuous cycle of rebirth
shiva – Hindu god, one of the Trinity of Hindu gods, considered the god of destruction and rebirth
stupa – Buddhist shrine or funeral mound, shaped like a dome, usually contains relics
vat or wat – Buddhist monastery
vishnu – Hindu deity, one of the Trinity (Brahma, Vishnu & Shiva), considered the protector and preserver